Peak oil has long passed. The modern convenience that cheap fossil fuel once afforded is harder and harder to maintain. Politicians have failed to adjust government to be of any use to the citizens living in a world falling apart at the seams. In this game players take on the role of citizens of a small city working together to build a sustainable future.

We imagine that the Project Scenarios can span a vast array of possible events that a community or city could face. The list of project scenarios that we have chosen is by no means exhaustive, but we believe that it encompasses enough to make the game realistic and fun to play again.

The game ends if Sustainability is reached and maintained for two additional turns, or the meter reaches midnight. 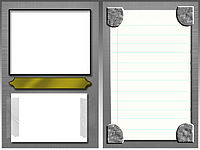 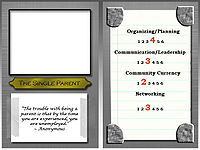 At least 1 point in each

Action Cards are fairly self-explanatory, they are actions that a citizen would take. The action cards are to be used by the players to help them finish the project scenarios.

Make sure to add the skill increase for your numbers

We based the development of our game on the list of pattern cards from the Public Sphere Project the aim of which is to "help create and support equitable and effective public spheres all over the world."

"Team Sofa King Awesome" (how is this not a great name?) is interested in designing a role playing game. Some of the examples mentioned were:

Moving Towards a Civic Community In our first brainstorming session we envisioned some of the elements of the game we might design:

Here are some more ideas about the game:

This is from Doug's Paper

We might be able to incorporate these into the game as steps for the scenarios to follow.

I also thought we could frame our game around one overarching scenario or some big picture issue that would take Civic Intelligence to solve. One thing that came to mind was Peak Oil leading to industrial collapse and the challenge the players would be faced with would be to work together to save their local community. If we go with something like this we could look at the Transition Network as a resource to see what that organization is doing to promote Civic Intelligence in a sustainability context.