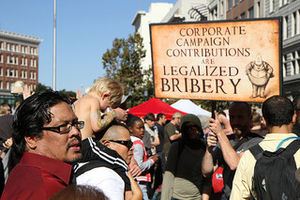 List of federal political scandals in the US: http://en.wikipedia.org/wiki/List_of_federal_political_scandals_in_the_United_States

List of state and local political scandals in the US: http://en.wikipedia.org/wiki/List_of_state_and_local_political_scandals_in_the_United_States