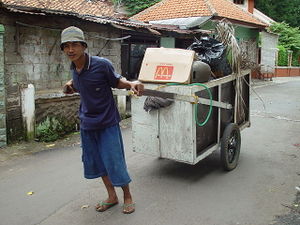 This pattern presents the way in which powerful cultures present their culture as the most acceptable lifestyle, and condemn the cultural practices of others. This often take place in tandem with the more official imperialism. Many nuances of culture are exotic and acceptable, but if it contradicts the values of the dominant culture, the ideals of the more vulnerable must be eliminated.

Disagreements in cultural values can cause tension, especially for a dominant culture, therefore the dominant culture must eliminate the other in order to maintain peace. The systems of capitalistic enterprise requires a common culture in order to produce and sell products to the consumer in the most efficient and profitable manner. The more people agree and think alike the easier it is to direct advertising and trend towards the consumer.

The greatest example is the conceptualization of "The American Dream". This ideology has been presented to countries around the world as the greatest system of cultural ideology, and continue to present the values of one country as better than any other. The expansion of american consumerism is among the strongest cultural aspects that has been presented and implemented in other cultures, often to their detriment. Within the united states itself, cultures that do not represent american cultures are viewed as a threat and are often stigmatized.