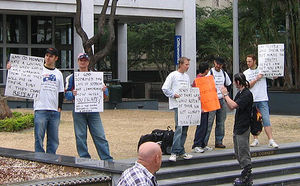 Fundamentalism is a catch-all term for a broad family of rigid and extreme beliefs. No country is immune: fundamentalism is found all over the world and although there are endless varieties, these various versions show remarkable similar characteristics. Among these characteristics are strong patriarchies, strict exclusionism, strict adherence to certain doctrines and writings, an acceptance of violence, xenophobia, and belief in the end of the world.[1]

Interestingly, the idea of fundamentalism is a relatively recent invention. Scholars assert that it is a broad response to modernism and it is often helped along when secular governments fail. Fundamentalism is often linked with extreme aversion to social and cultural change[2]. It could also be said that Fundamentalism is defined by unwillingness to change and a strong desire to impose a certain set of beliefs and ideals above others. In order for fundamentalism to exist there needs to be some change that threatens the ideals and beliefs of a group of people. Examples would include the debate over separation of church and state by Christian Fundamentalists in the United States, or even some acts of terrorism carried out by Islamic fundamentalists against consumeristic “western” societies.

Fundamentalism is often an attempt to further the views of one group of people over another group of people and as such it can often result in outbreaks of violence, human rights violations, and even genocide.

Xenophobia: It could be said that Fundamentalism can (often) involve targeting differing groups of people with beliefs that differ from your own. This could stem from fear of the group of people themselves or fear of what their beliefs represent, but either way it does relate to Xenophobia.

Violence: Some Fundamentalist groups have been known to use violence as a means to further their agendas. This is not to say that all groups use this tactic, but it is often part of the cultural view on fundamentalist groups that action thru violence is often used. This is what is known as religious violence.