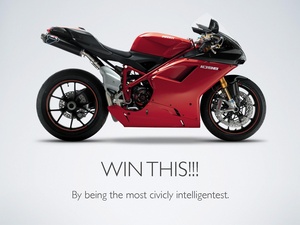 Gaming For A Better Future

Marketing campaign targeted at the youth to promote socially responsible actions through new media. The centerpiece is a new video game.

To inspire a new generation of citizens who will create a sustainable world through social responsibility.

The Two Patterns from the Workshop that weren't used

Our project hinges around a campaign to promote socially responsible action among youth through the use of a variety of media. The center piece for the campaign would involve a video game incorporating social networking media. Participants would play in real time with real people.

The game would incorporate a number of goals, each requiring cooperation and participation from the members of a given group. For example, a simple goal might be to clean up a neighborhood in the virtual world of the game. The goal would be stated within the context of the game, but not directly asked of anyone. Each player would be free to pursue the goal or not. In order to 'clean up the neighborhood' a player would have to recruit others, make decisions with others about where and how to start, and collectively act upon those decisions.

The nature of the groups would also be up to the players. Teams could form organically, with members deciding on their own rules of conduct, such as what constitutes a voting majority for various actions. Deciding to start a new project might require only a simple majority for example, while kicking out a group member might require two-thirds.

Players would be rewarded points based on their level of cooperation. The more points earned the more options become available (start a cooperative business, engage in aid internationally, build a park, etc.) It would basically be a simulation game that would reward cooperation and altruism rather than pure capitalist successes.