Difference between revisions of "ELiberate"

Civil societies of antiquity have leveraged both tongue and pen as the primary means of dialogue and deliberation. From purveyor to interlocutor, dialogue and deliberation centered around meeting places. The capacity for deliberation across geographical boundaries in the absence of technologically advanced artifacts was protracted at best. With the advent of Radio and Television, came promises of an enlightened, informed and connected society. Society soon found the industrial information complex had its own design for civil societies. For with ownership of airways comes disproportionate access to guide or distract citizens from the significant shared problems of our time. With an increasing world population, comes the need for increased civic participation. “Non-Proprietary Civic Collaboration” could be one possible answer, and an approach central to the underpinnings of e-Liberate.

Adaptations by people to a networked digital economy is taking place. Widespread access to ICT's without the physical restrictions of significant capital financing affords to humans the ability to construct coordinated bodies of work either collaboratively or individually. Technological artifacts such as computers, smart phones and the internet have fostered an era of global participatory political movements. The recent events in Egypt is an example of the power social networking sites. Real time reporting of world events is now tweeted, blogged and posted using Facebook and Twitter. Sensitive to this new era, e-Liberate offers a means of deliberation without the proprietary mechanisms of the industrial information complex. Coming at a time when it is critical that software applications offer spaces that facilitate dialogue, e-Liberate goes one step further. By leveraging Robert's Rules of Order, e-Liberate, provides a means towards structured deliberation, one uniquely focused towards participatory decision making. It is the aim of e-Liberate that this participatory decision making process will take a proposal though the "life of motion" cycle, culminating in a collaborative and definitive decision, representing group expression and "Civic Intelligence".

Simply put, e-Liberate is an online software application that facilitates online meetings utilizing standardized rules of discourse. Current organizational structure is a loosely knit group of individuals interested in civic engagement and deliberative democracy. "In 1999 a team of students at The Evergreen State College developed the first prototype of an online version of Roberts Rules of Order. This was later presented at CPSR's DIAC-00 symposium by John Adams and Matt Powell. In 2003 Evergreen student Nathan Clinton, working with Douglas Schuler, designed and implemented the system which is now ready for beta-testing with actual users. Clinton and Schuler named the system e-Liberate, which rhymes with deliberate." (Schuler, 2003) Since 2003 when e-Liberate went live, many organizations have expressed interest in using e-Liberate to facilitate meetings in their own organization. Utilizing this hidden asset (other companies), e-Liberate could grow exponentially, in both users and program development.

Dialogue and deliberation can be fraught with abuse. A cursory glance at television shows, such as Point/CounterPoint, Crossfire, Hardball with Chris Matthews, and many others to numerous to list, illustrates dissenting opinions are met with vitriolic responses. The political constituents of society (politicians), often fall prey to this form of contemporary rhetoric. We need to look no further than the latest political advertisement to see defamation of character executed by both sides of the political aisle. Political story telling works. Often framed as good against evil, protagonist versus antagonist, ether way, marketeers know humanity loves rooting for the hero. This form of pathos laden rhetoric has found its way into the digital domain as well as public and private organizations. While ICT's affords to humans an increased capacity with respect to communication, it doesn’t discriminate as to the content, or arrangement. It is this lack of structure that allows online discourse to meander into the realm of irrelevance or worse, end in hostile and insulting interaction between members. If you have ever attended an online meeting or engaged in a chat room, than you probably have witnessed the effects of deliberation without mediation. e-Liberate's approach is a little different. By leveraging communication technology with traditional parliamentary law, e-Liberate acts a sort of digital mediator that can (in theory) be adapted to fit the needs of any organization.

Time is essential in today's fast paced society. Organizations more than ever are seeking efficient ways to conduct meetings. Open chat rooms, group emails and the current offerings of meeting software are great communication tools, but lack the defined protocol necessary for structured deliberation. The desired outcome of the deliberative process facilitated by e-Liberate would be one that provides a measurable outcome. It would leverage group participation in such a way that the majority could not preclude the minority from being heard and similarly the minority could not prevent the majority from making decisions.

"The figure below shows the tool’s user interface: Content below provided by the [http://www.eliberate.opendcn.org/content/view/2 Public Sphere Project

Every participant always knows the current state of the meeting because the main motion and the motion currently under consideration are displayed in dedicated boxes. Moreover, an info box guides participants in the use of the tool. 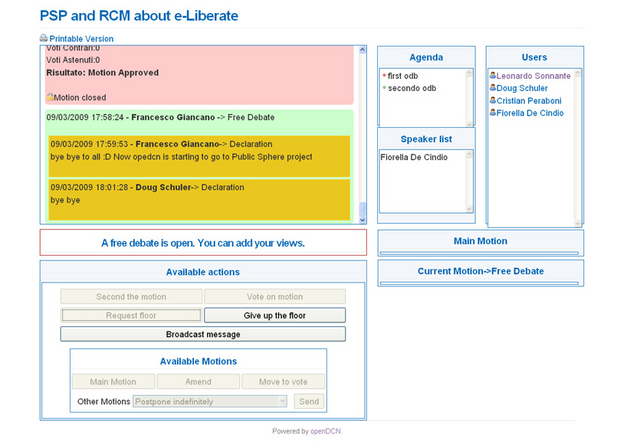 Some explanation with respect to the connection to "Civic Intelligence" might be useful at this point. The software itself is not civically intelligent, how can code be anything without human interaction. It is my understanding that e-Liberate can help civic and non-profit organizations as well private corporations identify a humane approach to business that is all to often missing in todays modern business environment. By all but nullifying the human tendency to silence the "Voices of the Unheard" or that of dissenting opinion, e-Liberate has the potential to foster participatory decision making, a central tenet of "Civic Intelligence".

Critical to the success of e-Liberate, will be access to funding. Acquisition to this monetary requirement could come via grants, non-profit or even for-profit organizations. The obvious source of income could come via selling advertising space, but sensitive to the idea private funding and or investment steers policy and organizational direction should be considered. e-Liberate can (should?) leverage an open-source model, by which the product is free to organizations. Removing the monetary barrier to entry will allow market penetration and financial support by early adopters. In the hands of these early adopters the software will evolve, as they seek ways to implement new deliberative modules utilizing forms of parliamentary law better suited to their group.

As with many emerging software applications, user participation is key. There are many elements that elevate Facebook to its current level of popularity, most notably is the obvious, user participation. Before Facebook's success was measured in dollars it was measured in eyeballs. "In a paper by Christiaan Hogendorn titled Spillovers and Network Neutrality, Hogendorn makes the case that the real draw to networks is the connection to people and the greater the number of people, the greater the draw, supporting further network expansion. Hogendorn simply states "Consumers value network effects a lot." (Hogendorn, 2010) Clearly, successful networks leverage both collaboration and widely distributed information. If Facebook has shown us anything it is that people enjoy interaction within a networked community. Central to the success of this model is that Facebook allows the users a space in which individuality can be expressed. In addition, exclusivity of community gives rise to a sense of ownership. Individuality and ownership must then be part of any application moving forward into deliberative democracy. This is not advocacy for an individual first, community second model, just a recognition that humans enjoy some form autonomy as well as the desire to remain connected.

Fiorella De Cindio speaking at Evergreen State college, laid out the framework for a deliberative software application. Three key components to the model were identified as “Community Space, Personal Space, and Deliberative Space.” Facebook comes close to achieving the requisite components, however falls short in De Cindio’s eyes due to the proprietary nature of Facebook." (House, 2011) e-Liberate by design employs Non-Proprietary Civic Collaboration, but if e-Liberate is to realize any form of meaningful success, it must consider allocating the resources needed for further application development. Organizations will need exclusivity on the app, thus providing the psychologically needed sense of ownership. In addition, this "organization page" will need a lower root page that is focused and "owned" by the user/participant/employee etc. This would provide a place for casual interaction among members, thus facilitating the "Community Space" De Cindio speaks of. It should be noted that exclusivity between organizations would be paramount, as to respect organizational privacy. The third "place" would be the personal page, and could be constructed much like Facebook's "Info Page", or possible designed following the Linkdin model.

e-Liberate provides the proverbial cones of deliberation, enabling organizations a sort of digital facilitator guiding the group through the meeting process.

"A new social institution or design will be both better in quality and more easily accepted if all relevant parties have input." This concept not only applies to institutional structure and design, but to existing entities looking for ways to incorporate editing ......

With the advent of the internet, organizations have been searching for new ways to conduct business. Carving out new organizational space, the internet to a large degree, dismantles the traditional barriers to communication, e.g. geographic, temporal and monetary. As organizations move beyond the local sphere of operation to one of widely dispersed, global activities, collaboration with remote colleagues in a formal way becomes a challenge. As a result many organizations rely on email, chat rooms and applications such as "Go to Meeting". All are good communication platforms and aid in resource conservation. "Go to Meeting" allows document presentation, and video conferencing for up to 15 people. e-Liberate also provides a platform for deliberation that has the same cost saving benefits as the applications mentioned above, in addition to providing a deliberative framework facilitating meeting progression.

"Historically modes of communication have been personalized, for example the personal transmission of knowledge in the era of Socrates and even today via lectures, town halls, community association meetings etc. The use of "nonlinguistic gesture" helps frame the connotation of the message, in the absence of this central component of communication interlocutors must rely on the written word, which in many cases can be a poor form of communication. ICT as it exists today increases access but not he quality of discussion, as it affords private, individual consumption of information," for example Blogging, Facebook, Twitter, etc. Central to the success of meaningful communicative or deliberative democracy afforded by the internet then must consider ways of adopting a more unabridged form of interaction. One way to accomplish the need for non-lingustic gesture is to incorporate video conferencing in addition to the written (typed) word.

e-Liberate suffers from a lack of continuous software maintenance and development. Thus partnering with non-profit organizations willing to supplement the monetary expense of development could provide further market penetration.

Proprietary forms of communication is a relic from the age of the industrial information complex. In a networked society non-proprietary forms of dialogue and communication rely heavily on individual content widely dispersed across popular networks. The "Tweeting" of the Egyptian revolution comes to mind, as well as the 100,000 new Facebook users Egypt gained on February 1, the day the Internet was turned back on. (The American University in Cairo) It would be very difficult for a company to develop a social networking application and compete with Facebook at a meaningful level. However, I believe the free market and some opportunistic cooperation will produce and market a product very similar to e-Liberate in the near future. e-Liberate does not currently enjoy any form of market popularity, let alone saturation. It is for this reason that e-Liberate's methodology and unique approach to deliberation is in a vulnerable state. "Secondary or late movers to an industry or market, have the ability to study the first movers and their techniques and strategies. “Late movers may be able to ‘free-ride’ on a pioneering firms investments in a number of areas including R&D, buyer education, and infrastructure development”. (Lieberman, M. and D. Montgomery, ‘First-mover advantages’, Strategic Management Journal)