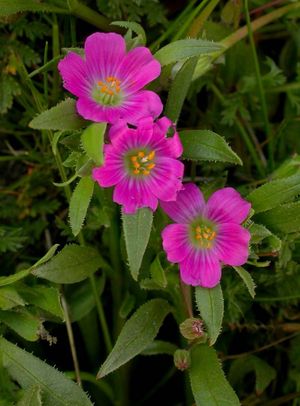 Site Rehabilitation-Calandrinia ciliata is an early colonizer of disturbed areas. It increases in abundance following a fire because of the increase in nutrients and the decrease in competing grasses.[5]

First Nations-Leaves and young shoots can be eaten raw, cooked or used as a garnish and make a tasty salad. Seeds can be eaten raw or ground into a meal. The seed can also be cooked as a piñole. The seed is very small and fiddly to harvest, especially since it ripens intermittently over a period of several weeks. However, it is rich in oil and was often collected in large quantities by native North American Indian tribes.[6] Seeds and greens were an important food source for many tribes in California including those whose territory neighbored the Salinan. Given their importance and their abundance, they were undoubtedly utilized by the Salinan as well. The shiny black seeds were a major ingredient in pinole (from the Aztec word for seed flour, pinolli) and were valued for their high oil content. The Chumash called the seed xutash or pil .[7] The name pil is reported in Onlone usage for redmaid seeds (Bocek 1984). Fages (1937) names pil as the seed of a plant used by the Salinan. The Miwok harvested the seeds in early summer. [8] The plants were pulled and spread out on a clean area to dry. The seeds were separated by shaking or hitting the plants over the cleaned area or into a basket. Then they were placed into a tightly woven winnowing basket where they were tossed, allowing the moving air to remove any chaff. The seeds were then dried for storage or parched in a cooking basket along with hot coals. The contents were kept in motion to prevent the coals from burning the basket. The parched seeds were pulverized in bedrock mortars into an oily meal, which was then prepared into balls and cakes. Large quantities of Calandrinia ciliata seeds have been recovered by archaeologists in burial sites in Chumash territory in the Channel Islands of Southern California. Not only were the seeds used as ceremonial offerings, as evidenced by these burial sites, but also they are often mentioned in Chumash myths. The Luiseño ate the tender young greens fresh, which are said to taste similar to arugula. Fringed redmaid greens contain oxalic acid, like spinach, and should be eaten sparingly. Cooking reduces the amount of oxalic acid.[5]

Other-The plant contains oxalic acid, so it should only be used in moderation. Oxalic acid can lock up certain of the nutrients in food and, if eaten in excess, can lead to nutritional deficiencies. It is, however, perfectly safe in small amounts and its acid taste adds a nice flavor to salads. Cooking the plant will reduce the quantity of oxalic acid. People with a tendencies toward rheumatism, arthritis, gout, kidney stones and hyperacidity should take especial caution if including this plant in their diet since it can aggravate their condition.[6]

Plants are intolerant of root disturbance, they are best treated as half-hardy annuals and sown in situ in late spring. In frosty climates this species can become a self-sowing annual, the seed germinating in spring. Mix the seeds with ten parts moist sand to ensure even broadcasting. Broadcast the sand and seed mixture over the prepared bed and scuff or rake the seeds lightly into the soil. Water lightly and keep the soil lightly moist until the seeds sprout (generally within one to three weeks when temperatures average 20°C). The plants are moderately drought tolerant once established.[5] Germination usually takes place within 1 - 3 weeks at 20°c.[9]

Shape: Lenticular with a narrowly winged margin. About 1/2 the size of Montia linearis. CACI tends to have a slightly heavier lip near hilum when compared to MOLI.

Surface: Seed has bumpy texture and is very shiny.

Could be confused with: Montia linearis