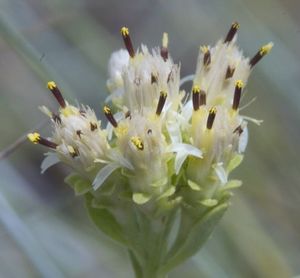 Rhizomatous perennial with a rhizomatous habit, stems usually unbranches, glabrous, and growing in colonies of many shoots.

Lowermost leaves reduced and early-deciduous, the largest ones a little above the base. 2.5-3.5 cm. Long and 5-9 mm. wide, oblanceolate, sessile; those leaves above numerous and gradually reduced; often scabrous on the midrib beneath, and with stiff, short hairs on the margins.

Sericocarpus rigidus is considered threatened in Oregon and a sensetive species in Washington.[4] Endemic to low elevation prairies from southern Vancouver Island, BC, to central Oregon.[5] S. rigidus is found in several south Salish Sea prairies, with the majority of its populations at Fort Lewis. Individual stands may be substantial in size because of its rhizomatous habit, but large distances may span between populations because the isolation and fragmentation of prairie habitat. This species is fairly intolerant of disturbance and is more likely to be found where there is a minimum of 32 percent native bunchgrass cover, because it establishes in gaps between clumps.[6] Maintaining areas of high ratios of native to exotic taxa with bunchgrass presence and low disturbance is key to the conservation of this species.[4]

Most commonly found on glacial outwash soils, but also occurs on clayey soils and bedrock. When germinating, use a 35-35-25-5 potting mix (sand, compost, pertile or vermiculite, and pumice).