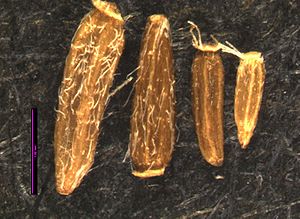 At a Glance: Forms patches from long creeping rhizomes. Stems leafy and hairy near the top, with a dense cluster of small yellow flowers.

Across Canada and throughout the United States.

Common in dry and moist habitats.

Haemostatic, styptic. The root is applied as a poultice to burns. An infusion of the dried powdered herb can be used as an antiseptic. The blossoms are analgesic, astringent and febrifuge.
A tea made from the flowers is used in the treatment of diarrhoea, body pains, fevers and snakebites.
The plant contains quercitin, a compound that is reportedly useful in the treatment of haemorrhagic nephritis. This plant is said to have similar medicinal properties to S. virgaurea. Goldenrod is a safe and gentle remedy for a number of disorders. In particular, it is a valuable astringent remedy treating wounds and bleeding, whilst it is particularly useful in the treatment of urinary tract disorders, being used both for serious ailments such as nephritis and for more common problems such as cystitis.
The plant contains saponins that are antifungal and act specifically against the Candida fungus which is the cause of vaginal and oral thrush. It also contains rutin which is used to treat capillary fragility, and phenolic glycosides which are anti-inflammatory. The leaves and flowering tops are anthelmintic, anti-inflammatory, antiseptic, aromatic, astringent, carminative, diaphoretic, mildly diuretic, febrifuge and stimulant.
A good vulnerary herb, it has also proved of value when used internally in the treatment of urinary infections, chronic catarrh, skin diseases, influenza, whooping cough, bladder and kidney stones etc. Due to its mild action, goldenrod is used to treat gastro-enteritis in children. It makes an excellent mouthwash in the treatment of thrush.
The plant is gathered in the summer and dried for later use. The seed is anticoagulant, astringent and carminative.
A homeopathic remedy is made from the plant. It is used in the treatment of kidney and bladder disorders, rheumatism and arthritis.
Goldenrod was reputedly carried into battle during the crusades and was often used as a substitute for highly taxed English tea during the American revolution. Goldenrod contains small amounts of rubber and Thomas Edison tried to make a business out of extracting rubber from inexpensive goldenrod. The yellow tops can be harvested and used to make a strong yellow or golden dye.