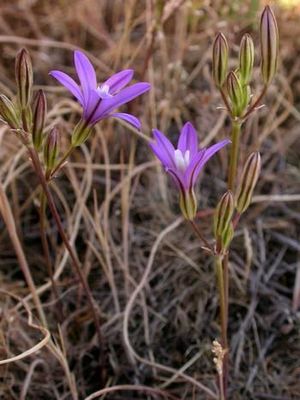 First Nations- corms gathered with a wooden digging stick and eaten by the Wiyot, Atsugewi, Miwok, Yana and other tribes of California. The Miwok have dug the bulbs about the first of May when the shoots were just appearing above the ground. They cooked the corms in an earth oven. The Atsugewi boiled the corms in water and sometimes cooked them in an earth oven. Other-Climax species in dry open grassland sites. Plant 15 cm Plant at the front of a sunny bed or rockery. Grow with Hooker's onion and broad-leafed stonecrop for good colour contrast. Plant with native bunchgrasses to provide support for the thin wiry flower stalks. Mix with nodding onion, common camas, satin flower and native bunchgrasses.[6]

If planting flowering-size corms, they can be directly planted outside. Plant the corms in the fall in full sun. The less crowded the more the corms will offset. Plant them 2 to 4 inches apart and 4 inches deep. A well-drained soil that is light and loose will produce bigger corms. Water and weed the patch regularly and protect it from small and large mammals, insects, and birds. Keep the ground slightly damp. If given too much water the corms will rot. If it rains fairly regularly, don't water the area. When the leaves on the plants have turned yellow and dried up, stop watering. Allow the corms to summer bake. The plants should be well established after one year. Plant the seeds before October 1st in a container and care for them for two years before out-planting. Plant the seeds in six-inch pots because the corms will pull themselves down to the depth they require. Plant about 100 seeds per pot. Place them on top of the soil and sprinkle a little soil over them and put one-quarter inch gravel on top. Set the pots in partial shade so they won't dry out so fast. They can be outside or in a hot house. The seed does not need to be stratified. Start watering the pots right away and keep them slightly damp. Fertilize the pots in late winter and early spring and protect the plants from birds and other animals. If the pots are outside, let the rains naturally water the pots and in a drought year, supplement with hand watering. Stop watering as soon as the foliage of the plants turns yellow. Resume watering the next fall, if rains are insufficient. After the second year, separate the plants and transplant them two inches apart in the fall when the corms are dormant, and then water. Grow them for one or two more years or to bloom, repeating this cycle and then out-plant them in the autumn.[7] Seedlings take 3 to 4 years from germination to flowering.[8]

Seeds were sown into cone-tainers filled with Sunshine #1(a soil-less peat-based media)amended with micro-nutrients (Micromax) and a slow release fertilizer (Osmocote 14-14-14). The flats of cone-tainers were covered with poly-ethylene bags and placed in a walk-in cooler (35-40 degrees) for 90 days. Flats were removed from the cooler after 90 days and placed in a greenhouse set at moderate temperatures (70 degrees days/50 degrees nights).[9]

Seed emerged within two weeks.[9] Higher germination rates were observed in seeds that were placed in a growth chamber with alternating temperatures (40 degree days 35 degree nights) and 8 hours of light 16 hours of darkness.

Seed Storage If planting seeds of harvest brodiaea, store the seeds in a paper sack until autumn. Storage not recommended plant in fall.[8]

Plant division: Lift dormant plants and separate cormels. Air dry and store at 5ºC in slightly-damp peat moss until spring. Shallow-plant cormels in flats. New plants will form a corm and will bloom after one more year of growth (Collect in Autumn, success rate "good")[8] OUTPLANTING CHARACTERISTICS AND REQUIREMENTS plants went dormant in mid summer and re-emerged in late fall. 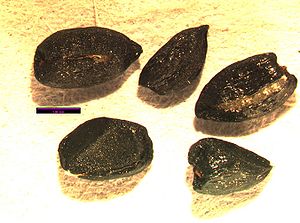