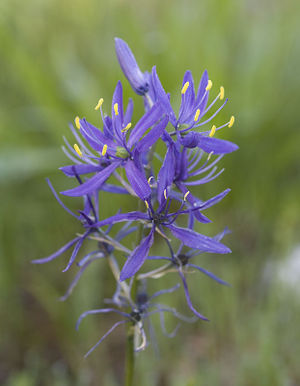 British Columbia to California, east to Montana and Utah.[2]

First Nations-Common camas bulbs were eaten by western Indians, trappers, and early settlers. Many western Indian tribes also used the bulbs as a trade item. Staple root crop pre-European contact. Prolonged pit cooking converts the high levels of inulin inherent in Camassia to digestible sugars. Hence, Camassia was a sweetener as well as an important trade item. The gathering of Camassia illustrates local systems of land management: family plots were well tended throughout generations and kept clear of weeds and rocks, actively maintained by hand and controlled burns for long-term harvest ([12]). Cakes have been formed, cooked and dried for storage and trade ([13]).

Other-Common camas was planted for mountain grassland restoration in western Washington, using bulbs salvaged from a nearby area undergoing subdivision. Plants can also be established by fall planting of seed. Strongly associated with Coastal Douglas-fir [14] Zone and its dry sub-zone characterized by the presence of Quercus garryana ([15]). Bulb - raw or cooked. The bulb, which can be up to 5cm in diameter, has a mild, starchy flavor when eaten raw, but a gummy texture that reduces the enjoyment of it somewhat. When cooked, however, it develops a delicious sweet flavor somewhat like sweet chestnuts, and is a highly nutritious food. Excellent when slow baked, it can also be dried and made into a powder which can be used as a thickener in stews or mixed with cereal flours when making bread, cakes, etc. The bulbs can be boiled down to make a molasses, this was used on festival occasions by various Indian tribes. The bulbs can be harvested at any time of the year, but are probably best in early summer when the seeds are ripe. One report says that the bulbs contain inulin (a starch that cannot be digested by humans) but that this breaks down when the bulb is cooked slowly to form the sugar fructose which is sweet and easily digested. Quamash bulbs were a staple food of the N. American Indians. The tribes would move to the Quamash fields in the early autumn and, whilst some people harvested the bulbs, others would dig a pit, line it with boulders then fill it with wood and set fire to it. The fire would heat the boulders and the harvested bulbs would then be placed in the pit and the whole thing covered with earth and the bulbs left to cook slowly for 2 days. The pit would then be opened and the Indians would feast on the bulbs until they could no longer fit any more in their stomachs. Whatever was left would be dried and stored for winter use.[16]

Fruit and Seed Collection and Extraction Allow seedheads to dry on plant, then remove and collect ([17]). Common camas seeds can be collected as soon as the pods mature (turn light brown) or split open to reveal the mature black seeds. Pods ripen from late May-July depending on latitude, longitude, moisture conditions, or elevation ([18]).

Fruit/Seed Dormancy and Treatment For maximum germination, seeds should have 42 -100 days of cold, moist stratification at 1-5º C ([20]). Alternatively seed can be sown in trays or pots in the fall and allowed to break dormancy naturally ([21]). After fall sowing, one-leafed, grass-like seedlings will emerge in February or March under suitable conditions. Seedlings require moisture through the spring growing period to survive. Warm temperatures during seedling development can be lethal (USDA). Seeds can also be sprinkled on top of soil in flats lined with pea gravel. The flats should be a minimum of 15 cm deep and should then be kept in a semi-shaded location for many years. This will form a sod or turf which can be cut up and placed in gardens, meadow planting or landscaping ([22]).