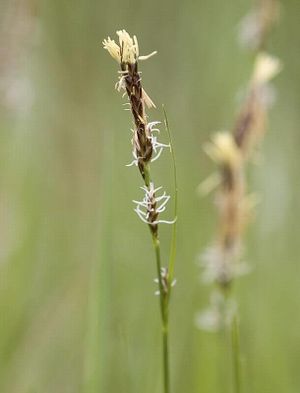 Perennial, rhizomatous, loosely caespitose sedge with erect culms to 50 cm tall.[2] Low to medium height compared to other Carex species.[3] Leaves 1-3 wide, flat, often shorter than the culms.[4] Tufts of dead leaves persist at base.[3] Inflorescences are spikes, with a solitary male spike usually pediceled above the female spikes, which is subtended by a leafy bract.[4] Perigynia is a 3-sided achene enclosed by a bract,[4] from 1.6 to 2.5 mm long.[3]

Both sides of the Cascades, from British Columbia to California, inland to the Rocky Mountains and Great Plains.[5]

First Nations: Use by Navajo as a gastrointestinal aid and to help fight infections.[6]

Long-stolon sedge is wind pollinated. Little is known of either sun sedge's ability to establish from seed or its growth rate.[3]