Difference between revisions of "Castilleja levisecta"

General: Perennial, the stems several, unbranched, decumbent, 1-5 dm. tall, softly sticky-villous. Leaves: Leaves viscid-villous, the lower ones entire, linear-lanceolate, the upper ones oblong-ovate to oblong-obovate, with1-3 pairs of short, lateral lobes on the upper 1/3 of the blade. Flowers: Inflorescence straight and upright, becoming elongate, the flowers remote and hidden by the overlapping bracts; bracts about the width of the upper leaves, oblong, obtuse, puberulent, with 1-3 pairs of short, lateral lobes near the apex, golden yellow; calyx 15-18 mm. long, deeply cleft above and below, its primary lobes again divided into 2 linear segments; corolla 20-23 mm. long, the upper lip slender, about 3-4 times the length of the lower lip; stamens 4. Fruit: Capsule.

Puget Sound of Washington; Vancouver Island south to the Willamette Valley of Oregon. The taxon is a regional endemic with a historic range west of the Cascade Mountain Range from the southern tip of Vancouver Island, Canada to Linn County, Oregon. In Washington, the species occurs in the Puget Trough physiographic province. The taxon is believed to be extirpated from the Willamette Valley physiographic province of Oregon. The southern-most extant occurrence of C. levisecta is in Thurston County, Washington.

This is a federally threatened species and an endangered species in Washington. 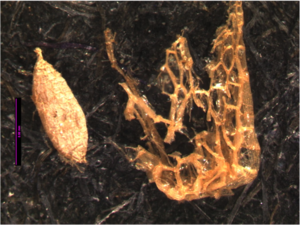 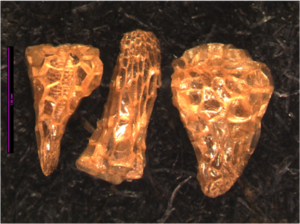 Shape: Seed is narrow at the hilum, widening at opposite end to create a cone like shape.

Color: Embryo surrounded by distinct honeycombed seed coat that is light tan and transparent. Inside, a golden brown, rice-shaped embryo is visible.

Surface: Seed is shiny and deeply honeycombed in texture.