Difference between revisions of "Danthonia californica"

California oatgrass (family: Poaceae) is a slow establishing yet long lived, cool season (C3) perennial bunchgrass of intermediate texture. Its stems (culms) grow 30-100 (10-130) cm tall and disarticulate (separate) at the lower nodes (joints). The leaf sheaths are smooth to densely hairy. Leaves are both basal and attached to the stem with the upper blades being 8-25 (10-30) cm long, flat to in-rolled, and spreading to abruptly bent. The ligule (at the throat of the leaf blade) is less than 1 mm and fringed with small straight hairs. Additionally, 1-3 mm long, soft spreading hairs appear at the leaf collar and throat. Flowering occurs in May or June depending on location. The panicle (inflorescence) is 2-6 cm long, loose, and open with 1-5 (3-6) broadly spreading spikelets. Glumes are 14-18 mm long. There are 3-8 (5-10) florets (flowers) per spikelet (see photo). Lemmas are 5-10 (8-15) mm long, hairy along the margins with stiff awned teeth and an abruptly bent awn that is (4) 8-12 mm long (Darbyshire 2003, Hickman 1993, Hitchcock et al. 1969, Klinkenberg 2007).

The panicle (seed head) flowers between May and early July and is 3-8 cm long, loose, and open with 1-6 broadly spreading spikelets. Awns (linear appendages) on the seed are abruptly bent and 4-12 mm long. Seed is produced both in the terminal panicle and at the lower nodes enclosed (hidden) within the leaf sheaths of the stem.

By July or August after the panicle has matured and some of the terminal seed has shattered (fallen from the plant), the remaining culm will disarticulate (separate) at the basal node (Darris pers. obs.). Dispersal of remaining cleistogenes is probably aided by this process (Dobrenz and Beetle 1966). The dry stems with enclosed seed may wrap around the feet or limbs of passing animals (Darris pers. obs.).

California oatgrass occurs naturally from British Columbia to southern California and eastward through the Rocky Mountain States and Provinces. Broadly adapted, it is a minor to dominant constituent of numerous woodland, shrubland, grassland, and transitional wetland habitats.

The species is found on a wide array of soils types from excessively drained sandy loams to less permeable silts and clays and from relatively infertile sites to rich, moist bottomland. While it inhabits summer dry sites such as steep, sunny south and west slopes, shallow rocky outcrops, and serpentine soils (soils high in magnesium, iron, and Reprinted with permission, Univ. of Washington Press certain heavy metals and deficient in other nutrients), as well as seasonally flooded wetlands, arid sites do not support it. The species occurs within the following ranges: elevation 0-7200 ft, annual precipitation 17 to 79 inches, and soil pH 5.5 to 8. Ratings are relatively low for fertility requirement, salinity tolerance, deer resistance, and shade tolerance, variable for drought resistance, and high for fire resistance and wildlife value. It has special adaptations for disturbance prone ecosystems.

Danthonia Californica is a colonizer of early successional habitats, California oatgrass is considered a species that can tolerate regularly disturbed ecosystems. It produces cleistogenes (self-pollinated seeds that are produced from flowers that do not open) and has hygroscopic awns that are known to be associated with disturbance-prone habitats. California oatgrass is considered a “stress-tolerator,” often found in sites with low moisture. Cleistogenes are often produced during stressful conditions, such as overgrazing or repeated mowing, and found in areas susceptible to fire 11, 1. California oatgrass also has a high fire tolerance and does not decrease in cover after burning.

Native bunchgrasses like California oatgrass are valuable for enhancing biodiversity. Healthy stands can reduce invasion by exotic species yet exhibit a spatial distribution compatible with forbs (Maslovat 2001). Combined with other native grasses and forbs, California oatgrass improves habitat diversity for feeding, nesting, and hiding by songbirds (Oregon Department of Fish and Wildlife 2000), as well as other animals. The grains are eaten by small birds and mammals (Mohlenbrock 1992). Prairies with California oatgrass as a definitive species are also unique refuges for other endemic organisms. For example, the Ohlone tiger beetle (Cicindela ohlone) is an endangered (federally listed) predatory insect known only to five remnant stands of California native grassland in Santa Cruz County (Santa Cruz Public Libraries 2003). These rare grasslands, including the coastal terrace prairies, remain biodiversity “hotspots” and are considered in need of protection (Stromberg et al. 2001).

Pollinators: California oatgrass is used as food by the caterpillar larva of certain butterflies including two skippers (Hesperia lindseyi and Hesperia columbia) (Robinson et al. 2007). It is an important component of native grasslands that form critical habitat for other butterflies including the vulnerable Vancouver ringlet (Choenonymphya tullia insulana), Taylor’s checkerspot (Euphydryas editha taylori) (Chappell 2006), and the endangered Fender’s blue butterfly (Icaricia icarioides fenderi) (Collins 2006). Cover and turf: Other potential uses include cover and erosion control in vineyards, young orchards (Edminster 2003), grassy lanes, and parks, as well as along trails. As a candidate for native lawn, this species can be planted and mowed to maintain a turf- like stand in landscape settings or elsewhere (Wrysinski 2004, Daniels 2007, Amme 2003). California oatgrass persists along compacted hiking trails and takes heavy foot traffic, trampling, and moderate summer moisture stress. It also has potential as a stay-green firebreak (Edminster 2003, Fire Safe Council 2007).

To overcome high dormancy, good germination will require fall sowing to cold moist stratify the seed outdoors over winter (alternatively, moist stratify in a cooler for 30-120 days at 1-4°F), scarification of the seed coat to weaken it, or both. Proven methods of scarification (sulfuric acid treatment, abrasion with sandpaper, use of a huller- scarifier or brush machine) each have their limitations. Hull removal (dehulling) and awn removal are coincidental to the process. Mechanical

This species is a relatively poor seed producer which has made commercial seed production prohibitive. Hoophouse propagation is recommended. Sow scarified seeds (removal of lemma and palea) in plastic flats, lined with newspaper. Keep flats at temperatures between 24-15C Seed production may be absent first year, peaks in third year. 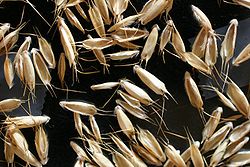 Additional Features: Lemma sharply pointed and has several nerves. Palea rounded at top. Lemma fringed at inner edge with, white bristles and bearded at hilum. Awn cork screws once or twice and then straightens. 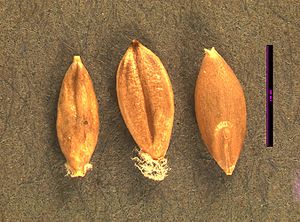 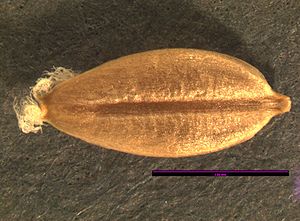