Difference between revisions of "Delphinium nuttallii" 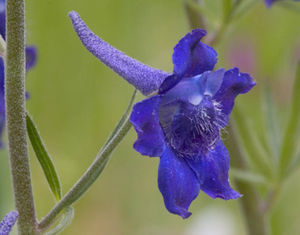 Landscaping-Not very easy to grow, but looks like it will reseed itself.[3]

Transplanting was done in early May by using an electric drill and portable generator to drill 1.5 inch diameter holes at the planting site. Plugs must be handled carefully to protect roots. Growth after transplanting is minimal and the plants will be dormant by late June. The following year they grow vigorously and may flower. The perennating organ is a fleshy fascicled portion of the root near the soil surface. These roots can be removed from the containers in the fall while dormant and outplanted to the field. 4 year old roots thus handled averaged 13.98 mm wide at the widest point and weighed an average of 0.526 grams when outplanted.[3]

Could be confused with: Delphinium menziesii.