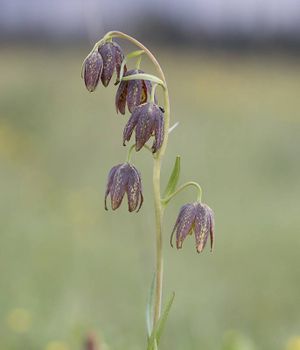 Prairies and grassy bluffs to woodlands and coniferous forests, low to high elevations.[2]

The bulbs of chocolate lily have been eaten by most Coast and Interior Salish peoples, either boiled or steamed in pits. Chocolate lily, also called “rice root” by Native American peoples, has bulblets that look like grains of rice. The bulbs grow relatively close to the surface and are easily extracted.[6]

Propagates readily from seed, and the rice-like bulblets can be used for propagation. Most bulbs take 3-5 years to reach mature flowering stage. When seed capsules form, they begin to split when they are ripe. Collect immediately, as seeds may be shed quickly. Let the seeds dry without heat, and store them until sown in labeled paper packets in a cool, dry, airy place. Do not use plastic bags, as the seeds are likely to rot. The best times to sow seeds are fall, but if seed is available earlier, sow immediately. Germination should follow in early spring. The recommended potting soil for seed germination and emergence is a commercial sand-based mix; with one-quarter part coarse sand added if the mixture does not have a sandy appearance. Space large, flat seeds of Fritillaria one seed’s width apart. Sieve a light covering of the soil mix over the seeds so that they are no longer visible, and then cover with a generous layer of grit or aquarium gravel. Label the pots with the plant name, seed source, and date. Stand the pots in a shady place in the open garden, or plunge them in a sand frame, and keep them moist [6].

When the seedlings have germinated, bring the pots into full light in a cold frame or greenhouse. Keep them moist until they show definite signs of dying down, and then water them very sparingly. Fritillaria seedlings should be kept slightly moist during this senescent period. Start watering again in early fall, or as soon as there is new growth, and keep the pots watered until the growth dies down. Leave most bulbs for two growing seasons before repotting, unless they grow vigorously. Larger bulbs are formed if these seedlings are fed the second year. Use a commercial liquid feed as used for tomatoes, but at half the manufacturer’s recommended strength. After two years, remove the bulbs from the pots after they have died back. Separate out the bulblets, clean them gently, and repot them in clean, moist soil. For Fritillaria species, use a soil mix of one part sterilized leaf mold, one part peat or compost, and one part sterilized soil, with a further 1.5 parts of coarse horticultural sand or seed-grown perlite. It is better to grow seedlings in pots for 3-4 years before planting them outside.[6] 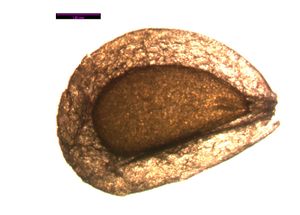