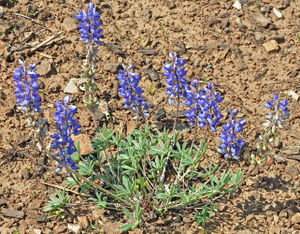 Leaves are both basal and caulescent, palmately compound, and covered with fine hairs on both surfaces.[2]

According to Flora of the Pacific Northwest, "Perennial lupines in North America form a taxonomically difficult group in which some species boundaries are blurred by wide-spread interbreeding; not all plants will readily key."[3]

Prairie lupine was the first plant to colonize the devastated slopes of Mount St. Helens. It's seeds are probably dispersed by explosive dehiscence (bursting of the seed pods) and rolling, or by erosion and deposition.[6]

Other species in the Lupinus genus are important food plants in the Salish Sea. In Keeping it Living, many propagation practices of different Lupinus species, such as L. nootkanensis, are detailed.[7]

Sow lupine seeds in potting soil mixture of coarse and fine particles. Like other legumes, prairie lupine has root nodules which house bacteria which fix nitrogen, providing fertilizer for the plant. Potting soil can be inoculated by mixing a small amount of soil from the seed collection site in the potting mix. Use low nitrogen fertilizer and no humus. Plant seeds singularly in long narrow pots (at least 3”) and transplant from pots into the field within the same year (about 8 months). Lupine seedlings have very sensitive roots and suffer from root damage when handled excessively. Sensitivity to the root system is especially needed when transplanting from nursery containers into the field. Mist lightly, daily with restricted water.[4]

Fruit and Seed Collection and Extraction Seed can be hand collected from June to August, but collecting is slow due to the small size of the plant. Seeds should be dried in the pods in paper bags. Cuttings can also be taken from the side shoots of hardened stems in the spring.[4]

Lupine seeds have a hard seed coat, and because related lupine species are known to have long-lived dormant seed banks (e.g. L. arboreus was germinated in a seed bank study after 45 years), it is likely that prairie lupine seeds are also long-lived and can be stored at low moisture and temperature levels for several years.[4]