Prairie lupine is a small perennial lupine of diverse form and habitat in the Pacific Northwest. It ranges from matted low growing forms to erect plants ranging from 10-35 cm high. The palmately compound leaves have 5-7 oblanceolate leaflets. The leaflets range from 1-4 cm long and are noticeably hairy on both surfaces. The flowers are dark blue to purple, sometimes white in color with a lighter banner. The banner is well reflexed from the keel and is not hairy on its surface. There are five known varieties of Lupinus lepidus. Variety lepidus is best described by it’s extended racemes growing above the longest leaves and the length of it’s flowers between 11-13mm long.

Distributed in the lowlands west of the Cascade Mountains from southern British Columbia to northwestern Oregon.

Occurs in lowlands areas growing in arid climates (40-65 inches of annual precipitation) at elevations below 600 feet on gravelly to sandy soils, often on flat or mounded plains of recessional glacial outwash.

Coarse and fine soil, low nitrogen and no humus

Prairie lupine was the first plant to colonize the devastated slopes of Mount St. Helens. It's seeds are probably dispersed by explosive dehiscence (bursting of the seed pods) and rolling, or by erosion and deposition.

Sow lupine seeds in potting soil mixture of coarse and fine particles. Like other legumes prairie lupine has root nodules which house bacteria which fix nitrogen, providing fertilizer for the plant. Potting soil can be inoculated by mixing a small amount of soil from the seed collection site in the potting mix. Use low nitrogen fertilizer and no humus. Plant seeds singularly in long narrow pots (at least 3”) and transplant from pots into the field within the same year (about 8 months). Lupine seedlings have very sensitive roots and suffer from root damage when handled excessively. Sensitivity to the root system is especially needed when transplanting from nursery containers into the field. Mist lightly, daily with restricted water.

Seed can be hand collected from June to August, but collecting is slow due to the small size of the plant. Seeds should be dried in the pods in paper bags. Remove the seeds from the pods by hand thresh and screen. Cuttings can also be taken from the side shoots of hardened stems in the spring.

Store air-dried seed under cool, dry conditions. Protect from small mammals and rodents. Lupine seeds have a hard seed coat, and because related lupine species are known to have long-lived dormant seed banks (e.g. L. arboreus was germinated in a seed bank study after 45 years), it is likely that prairie lupine seeds are also long-lived and can be stored at low moisture and temperature levels for several years.

No cold stratification required. Seed requires scarification. Shake in jar half-filled with coarse sand, scarify with sand paper7, or rock tumbler for two hours. After scarification, soak in hot water until the water has cooled (approximately 3 hours). Seeds that sink have absorbed enough water to be sown. Those that do not sink should be dried, scarified and soaked in water again. 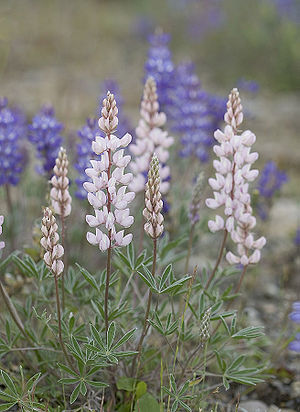 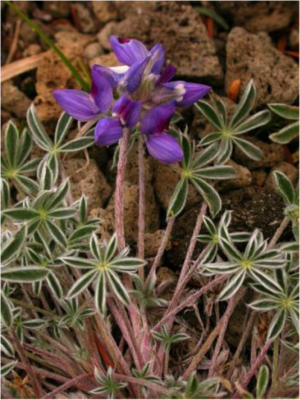