Difference between revisions of "Packera macounii" 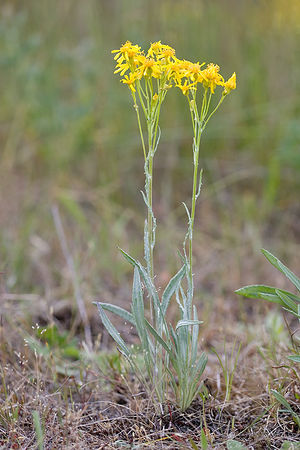 This plant is listed with the State of Washington as critically imperiled due to the reduction in native prairie acreage. Though it was once found in a wider range, the only known remaining population in south Puget lowland prairies is on Joint Base Lewis-McChord.[4]

"Packera macounii grows in a manner common to many perennials from the aster plant family on the West Coast of the United States. Many bloom in late spring to early summer and ripen seed in the hottest, driest part of the year. Summer rain is uncommon in most lowland areas of western North America, and plants must develop adaptations to set seed under dry conditions. The leaves can persist and provide nutrients to the developing seed by being small, linear and covered with grey hairs: this reduces water loss and overheating during the summer. Often the seed is quite small and ripens quickly after pollination further reducing the plant’s need for moisture. Packera grows in sites where there is little competition from other vegetation. The seed is adapted to germinate in open conditions, requiring a broad spectrum of light to germinate. In the nursery, the seed is sown on the surface of the soil. Fresh seed needs no stratification."- From the draft protocol for P. macounii, Sustainability in Prisons.[4]