Difference between revisions of "Perideridia montana" 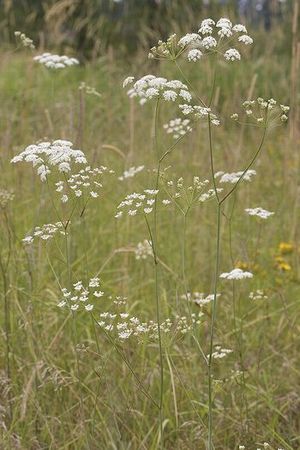 P. gairdneri is a thick, tuberous rooted perennial herb that is slender and hairless. It has solitary, leafy stems, and grows from 40 - 120 cm tall. It has several, well distributed leaves that are once or two times pinnately divided into long, narrow segments. Flowers are white or pink and small, and are united in groups to form one to several compound umbels. Fruits are nearly spherical and slightly flattened, with distinct ribs. Fruits 2 - 3 mm long.

Occurs from British Columbia to Saskatchewan, south across the Rockies and West Coast, down to Southern California.

Roots of P. gairdneri were eaten my Straits Salish and other First Peoples groups of the Northwest, and by interior peoples from south central British Columbia, to the great basin. The roots were pounded by native people to make flour.