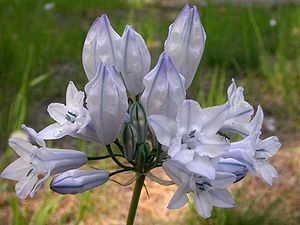 Distributed on both sides of the Cascades in Washington; British Columbia south to Oregon, east to Montana.

Young seedpods - cooked as a potherb. An excellent green.

Seeds are easily collected when the capsule begins to split, either by shaking the seed into an envelope or collecting whole capsules. Seeds are black when mature. They are stored in envelopes or paper bags at room temperature until cleaned. Seed shaken from capsules needs no cleaning. Whole capsules can be crushed to release seed. Seed is cleaned with an air column separator..

In late November or early December seeds are sown in flats containing a 3:1 mix of Sunshine #4 and sharp sand. They are covered lightly. A thin layer of sand or fine grit is applied to the flats to prevent seed and soil from floating out. Pea gravel is not used because many of the stones are impossible to separate from the corms at harvest. Flats are watered deeply. They are placed outside subject to winter conditions.
Germination begins in late March or early April and continues for 3 weeks. Some seed will germinate after a second winter.
1 month
Flats are moved to the lath house in late May. Plants will develop 1 true leaf in the first season and go dormant in mid to late June. They are left in the lath house with no protection, except snow cover, over the winter. Trays should be protected from extreme cold if not covered with snow, however. In subsequent years, they are watered as needed and fertilized twice with a water soluble, complete fertilizer during the active growth phase. After dormancy, flats are watered only enough to keep the soil from drying out completely.
3 years
Hardening not needed, as plants are grown outside.
After 3 years, the plants have developed corms of about 1/4" inch in diameter. In August or September of the third year, the trays are dumped out and corms are separated from the soil using hand screens.
Corms can be dug from existing populations and moved to another site. They can also be held in pots for later replanting. Corms are buried 6-8 inches and can be difficult to locate. Corms should only be removed from sites where habitat is to be destroyed by development.
Diploid plants produce few cormlets and the corms are generally in the upper three inches of the soil, while polyploid plants are more likely to reproduce vegetatively by cormlets and the corms are more deeply buried [1]