Difference between revisions of "Preface" 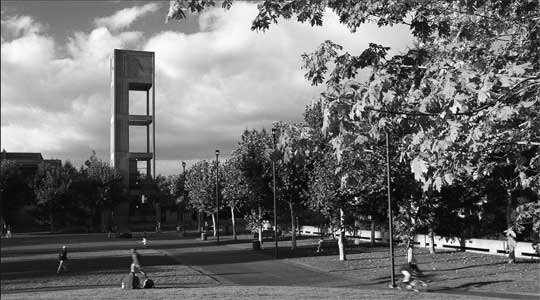 The college has drawn upon four major processes in the development of the self study. First was the strategic planning process, an institution-wide updating of the 2000 strategic plan, which took place from September 2005 to November 2006. This provided the major framework around the process. The focused identification of Evergreen as a “public, interdisciplinary, liberal arts college” served as a clear, central reference in the self study work. Second, the ongoing Curricular Visions process begun in the 2005-06 school year and the 2005 Higher Education Coordinating Board Planning Unit Review process provided major review and analysis of the strengths and weaknesses of the curriculum. Third, the campus master plan, completed in calendar year 2007, translated the strategic plan goals and objectives into a physical plan for the campus. Fourth, in March 2007, the college put together a team of Key Point People (KPPs) comprised of a chief writer and a group of lead writers and organizers who undertook the review of the college under each of the nine standards. In addition, the Office of Institutional Research and Assessment organized and made available a wide array of data that helped define and document the project.

The KPPs were responsible for gathering data in support of their analysis of the standards. While this process varied from standard to standard, for the major academic standards it involved meeting with faculty and library staff, sharing draft reports, and responding carefully to concerns raised. Faculty opinions were solicited by e-mail, at the faculty meeting, in planning units, and in governance groups. Student Affairs staff provided early drafts of many elements of the standards and met with the chief writer to provide input.

Evergreen's self study process began in spring 2006 (reaccreditation timeline). The chief writer began pulling together materials and kept abreast of the developing data in the spring and summer of 2006, and the KPPs began to meet as a group in spring 2007. Subsequently, the KPP’s met biweekly through the 2007-08 school year, producing a preliminary draft in November, a full first draft in January, a second full draft in early March, a penultimate draft in mid-April, and a final draft by May 30. A small group of faculty was of significant assistance to the chief writer for Standard 2 in the early conceptual stages of the review. This group met with philosopher Elizabeth Minnich to hold discussions about liberal arts and interdisciplinary education. The writers of the primary Academic Standards 2, 4, and 5 met and shared drafts of their work.

Broader campus involvement in the self study process began in fall 2007 (Community Participation Timeline). At two faculty meetings during the 2007-08 academic year, faculty met in small groups to discuss Standards 1, 2, 4, and 5. Opportunities for campus-wide review of each of the standards were held in January and February (January 8th e-mail). In April, a series of topical brown bag lunch forums were held on thematic issues that had surfaced during the self-study process (April 9th e-mail). Student responses were solicited at public meetings and through focus groups that addressed Standards 2 and 3 (Student Focus Group - Standard 2 -Summary 5Feb2008, Student Focus Group - Standard 3 -Summary 5Feb2008, Student Focus Group - Standard 2 -Summary 7Feb2008, Student Focus Group - Standard 3 -Summary 7Feb2008). The chief writer, other KPPs, and the provost met with the board of trustees on two occasions to review the work. They also met with senior staff to review Standards 1 and 2. Time at two deans' meetings was also dedicated to review these drafts. The college’s academic grants manager subjected the second draft of the report to a critical reading. In summary, Evergreen has been working on the self-study for much of the past two years and has been able to draw together elements of the strategic planning process, Curricular Visions process, and the campus master planning process, in addition to ongoing institutional research and numerous special meetings, memos, and opportunities for input.

The self study had three major goals:

1.) The college wanted to review its responses to the commission's findings in the 2003 Regular Interim Report. The review of concerns and data surrounding the issues of general education were of particular importance to the college. The college believes that it has made real progress on these issues. The primary response to the three recommendations of the commission is contained in the “Response to 2003 Regular Interim Report Recommendations” section.

2.) The college wanted to use this opportunity for an assessment of upcoming issues. The self study has significantly helped identify issues around the relationship of graduate and professional programs to the liberal arts curriculum, the need to review and rethink governance at the college, a need to organize a more regular system of academic advising, and a continuing need to think about the way the size and duration of programs, half-time programs, and courses interact to affect student experience.

3.) As a part of the college’s ongoing experience with replacing its first generation of faculty, one objective of this study has been to articulate the ways in which the elements of an Evergreen education fit together to create an important and coherent alternative public education that succeeds in producing autonomous, collaborative, competent, and engaged learners and graduates.

As a part of the self study, the college has carefully reviewed the eligibility requirements articulated by the commission and has met them.