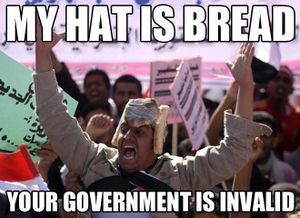 Dissenters, especially those who are active in their dissent can be delegitimized in order to take away their ability to be taken seriously by the public. This is very effective when done thru mass media outlets, but there are other ways to accomplish this as well. If your group has access to any media (T.V., Movies, Advertising, etc.) these can be used as well. One very effective form of delegitimization is ridicule because of how easily it can spread and how effective it can be.

Mocking, or pointing out hypocrisies of activists. Ignoring the message of a protest and focusing instead on the individual or group who are protesting. There are several other ways to delegitimize activism including developing the ideas that activism is hopeless, or that engaging in politics is a boring waste of time.