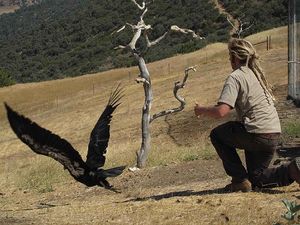 Man releasing a California Condor, an endangered species in North America, back into the wild.

Conservation Reliance describes the process of a species only being kept from going extinct due to the efforts of conservation groups around the world. These groups often do things like keeping wildlife from harm due to human growth and progress, and can often be using artificial insemination in order to keep populations of endangered species from dwindling or dying out completely. Some of these species require temporary measures to repopulate their numbers to a sustainable level and some require constant human intervention to keep their small numbers from becoming even smaller and eventually leading to extinction of their species. Much of this work done on these species behalf is not fully recognized by the public; remaining mostly invisible to many people.

Through human actions like: global warming, environmental degradation, natural habitat destruction, and other many other factors, there are countless species alive today that are hanging on by a thread or in significant danger of future extinction (not to mention the species already thought to be extinct). This has led to certain conservation groups and organizations, and in some case whole cities, to intervene to keep populations of these species from dwindling.

Corporations may even get in on the action. Oil, coal or other companies that produce much of the environmental waste that accounts for global warming may choose to donate to—or start their own—organizations that help in species conservation to improve their reputation with the public, without ever having to make real efforts to change the way they do business in a way that would make a long term impact—this would likely mean losing money in the short term.

These actions are reactionary and often temporary; ultimately many of these efforts may fail and only slow the extinction of the species they are attempting to preserve. Some of these efforts also may prove to shield the public from the reality of human impact on the environment and in such a way may keep people from taking action against such human impact.

This article on proposal to airlift food to polar bears in the arctic is an example of one wat this pattern may manifest itself. http://www.cnn.com/2013/02/20/opinion/sutter-polar-bears/index.html?hpt=hp_c1