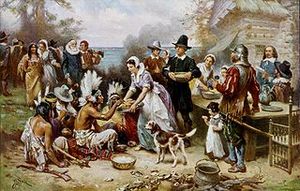 Early American history as taught in the public school system contains many examples of myths and exaggerated heroism[1]. Many elementary and high school school textbooks, including modern textbooks, contain misinformation and stereotypes that generalize American Indians as primitive and as savages[2]. The early European settlers are depicted as good Christians fleeing oppressive British rule and settling peacefully in the New World with the good Indians while having to defend themselves against the bad Indians. Little is said about the native population plummeting by an estimated 80% between 1492-1650 due to disease carried from the Old World settlers, outright massacres, and forced labor[3].