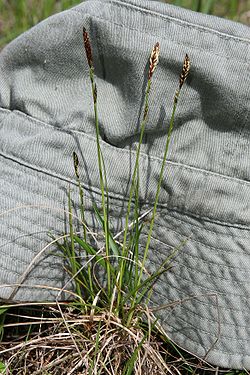 Ecological Setting-Stands are found on gently rolling uplands with little to moderate slope. Soil Texture-Stands occur on substrates with a significant component of sand, sandy loams or just sands, of colluvial or aeolian origin. Nutrients-Nitrogen-medium Moisture Regime Moisture levels may be high and deep in the profile. Shade Tolerance Shade intolerant Successional Status-occurs and may be common in all stages of grassland succession

Long-stolon sedge is wind pollinated. Little is known of either sun sedge's ability to establish from seed or its growth rate.