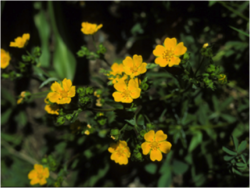 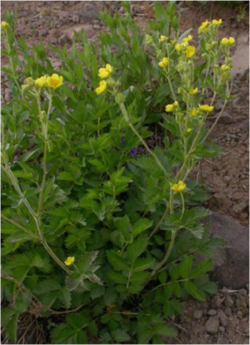 Sticky Cinquefoil is a one to two foot tall perennial with creamy yellow flowers. It has soft pinnately compound leaves and red stems. It is a highly variable perennial forb. Erect stems arise 4 to 24 inches (10-60 cm) from a loosely branched caudex. The mostly basal leaves are pinnately compound and sharply serrate. Leaves and stems are glandular pubescent. Flowers are few to many in a flat-topped cyme. Fruits are glabrous achenes.